Whovian Women and the Disappearance of Stephen Moffat

I wrote a post on this topic yesterday,  and it disappeared into cyberspace leaving only the title, which seems rather apropos. So bear with me as I attempt to recreate my brilliance *sigh*.

Right, so I spent part of yesterday trying to come up with an abstract for a conference in the States next year. This conference is on sci-fi in and across media, and I’m more of a fantasy girl, so this requires a fair bit of thought on my part. I do, however, enjoy a bit of telefantasy — The X-Files, Buffy, Dr Who. And I started thinking about two of the more recent and unusual Dr Who “companions” in a bit more detail after watching the introduction of new companion and “souffle-girl” Oswin (Jenna-Louise Coleman)  this weekend. 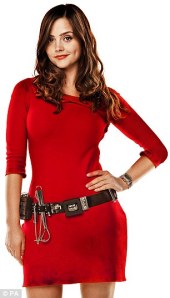 A hyphenated Coleman as the Doctor’s companion! That’s almost me, right?

Oswin (left) and Idris (below) share many characteristics with the Doctor– his manic speech patterns, genius intellect, and social oddities (Oswin, for example, greets people by commenting on their facial characteristics, and tells the Doctor that his chin “could take your eye out”; Idris bites him by and then explains that biting is just like kissing, only there’s a winner). In other contexts, these traits could be interpreted as being symptoms of autism spectrum disorder or even mental illness. In the Whoniverse, however, these are just signs that the characters are like the Doctor: just a little bit alien. 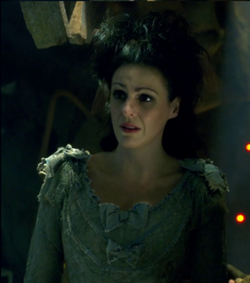 *(SPOILERS, as River Song would say in that lovely sing-song way of hers)*

Oswin, it transpires, has been unwittingly turned into a Dalek because of her superior intellect. Idris is a humanoid manifestation of the Doctor’s time machine, the TARDIS. She appears in a 6th Season episode written by Neil Gaiman. When the title had been released and the Internet fandom went into meltdown trying to work out who the Doctor’s Wife might be, Gaiman and show runner Stephen Moffat began a bit of a Twitter tease as to her identity, letting slip that it was an old character with a new face. When I went to confirm the original tweets, however, this is what I found.

It seems that about eight hours before I went looking for his Tweets, Stephen Moffat has deleted his Twitter account after a new wave of Twitter rage, alleging misogyny in his characterisation. It apparently arose from an old interview, wherein he was explaining the viewpoint of a character from a TV show, not his own and not a Dr Who character, either. Twitter rage seems to be all the rage at the moment, with a couple of high profile cases in Australia over the last fortnight. At the time I was looking, the Doctor Who fandom was split between those who thought Moffat was a misogynist who should never write again, and those who thought he was a genius of the highest order.

I fundamentally don’t “get” Twitter rage. Fans have unprecedented access to shows, show-runners, writers, actors and so on, and to behave in such a way as to have that access denied seems to me to make very little sense. (If you’d like to abuse me for holding this view, you can find me @KMcMahonColeman).

Obviously, I still need to refine my ideas, but at the moment I’m looking at 2 hybridised, mechanised female characters who share elements of difference with the Othered, alien Doctor. In their cases, however, the differences are (SPOILERS, SWEETIE) ultimately fatal as neither survives–or at least, not in non-mechanical form. And it seems there’s also ground to cover in terms of how the development of characters such as these led to a(nother) social media mini-crisis.  I think there’s something there. But please, don’t pinch my ideas — it’s taken me so long to get this far, and the deadline’s imminent. 🙂